By Hyzoran aka Jesse Kowalik

A theoretical war between the Redrum Empire and the Replublic of Newbies Playground.

Predicted to start sometimes in mid 2013, and cause universal chaos in the land of Na-Pali.

The Current Emperor, and good ally to the Newbies Republic ,Lord oZ, gets drunk and wakes up in Thailand, where he is captured and soon executed by Rouge Members of

The two eligible successors to the throne (Annihilation aka 'Pothead the

the throne. An unknown Assailant, believed to be from deep within the ranks of

Hooked Ascends to the throne, and fueled by madness and greed, starts to invade other factions within the Unreal community in a series of blitzkrieg-style attacks.

The Oldunreal Kingdom hires Mercenary groups HLK and UDHQ to aid in the war, and are stationed just outside Oldunreal's borders in Nyleve falls. HLK are soon overwhelmed as UDHQ showed up only momentarily, before their communications network went down for the 9th time since their formation and returned home to investigate what happened.

Oldunreal is slowly conquered from the more numerous, and slightly superior forces of the Redrum empire.

The Prototype weapon fires off a shot, obliterating a massive chunk of the Redrum 12th division, lead by Commander Itachi.

Weapons Operator :..:. attempts to fire another shot, but the 227j suffers a system

Redrum's Bombers soon bombard the Capital of Oldunreal, ISV Kran, which is destroyed, killing King Smirf and many of Oldunreal's top officials.

Pitbull and :..:. manage to escape along with most of the Oldunreal 2nd General

division, and the 4th Oldunreal Mechwarrior lance. Pitbull and :..:. travel to the Newbies Replublic to warn them off the growing Redrum Empire, and offer to train their armed forces in combat and offer them advanced military technology.

Newbies Replublic's massive production and economic capability, paired with the

advanced technology, is able to produced a sizable, and strong military comparable to that of Redrum, but is still too weak to contend with the evergrowing Redrum.

Redrum soon conquers HLK, OMC, and many other small nations.

High Ranking Military officers on both sides such as Rubicon, Strategy, Harddrive,

Jackrabbit, Pitbull, Moe, Mindsaver, Melissa, boober, Jinx and many others are taken

prisoner of war by the opposing side. A prisoner exchange is neogtiated, but Packleader's bandit group bombs the neutral area of the prisoner exchange and everyone is killed, along with Negotiators Spinach of Newbies and Bman of Redrum.

The War continues for several more years before Glenn of Newbies has an idea to help Newbies win the war. Glenn suggests that Chancellor Sparky attempt to contact their distant ally, the UAOK empire, located in a distant star system.

Sparky agrees and sends Foreign relations minister Kamikaze to the distant system to Contact Kyrek Hyzoran. Kyrek Hyzoran, previously a high ranking official in the Redrum empire, resigned to form his own Empire in the distant reaches of space.

Hyzoran, after being informed by Kamikaze of the situation, takes his best regiments and calls the help of his Mercenary Allies All Rights Reserved and Bob is Unreal to help Newbies in the war.

With the Help of UAOK and the Elite Mercenaries, Newbies is able to capture Farmer Jim and destroy UnrealSp.

After close interrogation and examination, it is revealed that Farmer Jim was possessed by Epic Games, who are attempting to destroy the Unreal community in order to get them to buy Gears of War. Jim is pardoned by Hyzoran, as they prepare for the next battle.

All the remaining warriors of the Unreal community form up to the gates of Epic Games. The now proclaimed Emperor of Unreal, Hyzoran, proceeds to the gate and shouts "May the Dark Lord Tim Sweeney come forth, Let justice be done upon him!" After a momentary pause, the gates of Epic Games opens and a massive army of steroid-high glowing armor douchebags from Gears of War march out of the gates. Kyrek Hyzoran turns around and proclaims "For Unreal." Everyone charges, and a massive battle between good and evil ensues. The battle lasts months as the invincible Unreal warriors kills millions of Gears soldiers. For each Unreal warrior Lost, over 60,000 gears are killed. Epic Game's Emphisis of Quantity of Quality, aka Consoles over PC, backfires as the soldiers are barely able to kill a single Unreal warrior. The battle ends with victory for Unreal.

After the war, the Unreal community forces Epic Games to make Unreal 3, and order is restored to Na Pali. The great priestess Kitty ressurects from the dead all those who are killed in the war, including Late Emperor oZ. oZ, in return for saving Unreal, finally grants Kyrek Hyzoran an admin position in Redrum, after being impeached for misconduct before.

An era of peace follows.

Cd quality versions. 4 albums in all: 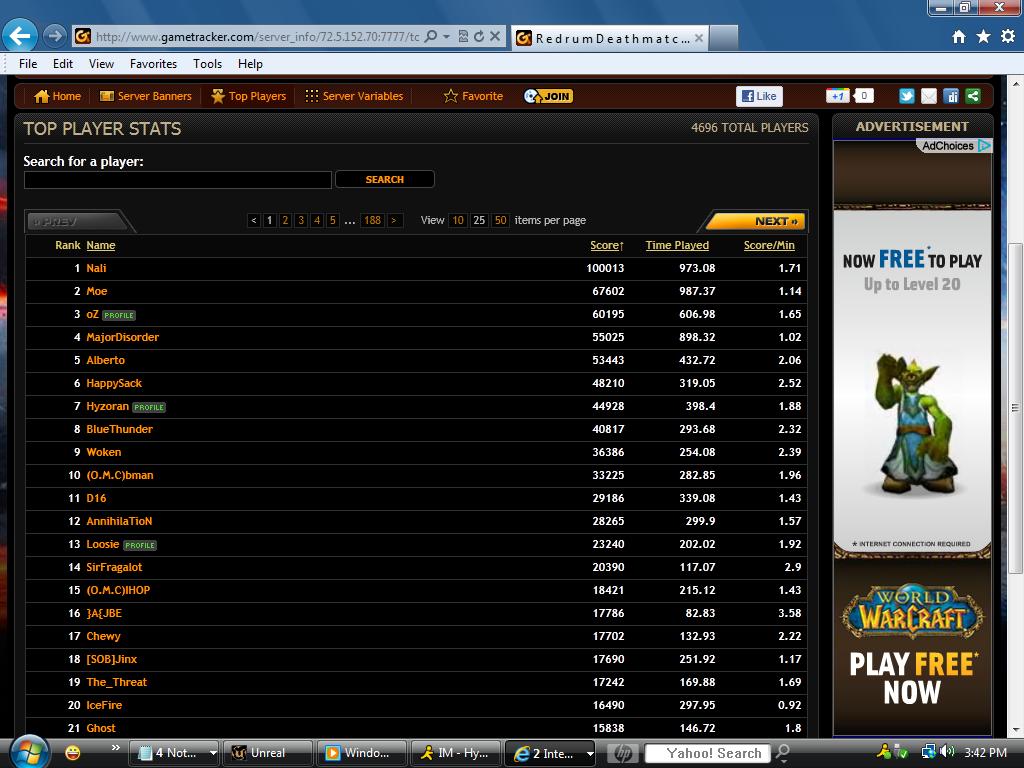 the funny photos section should be good stuff : )

Rip maps out of your cache 227 users

This only applys for 227 users:

Open your unreal folder up, find the cache folder, open it. Put the files in TYPE Order. At the very top or bottom, there is a file called Cache.ini. Open it. Once you have done this, youll see what to do. You find the map or file u want in the cache INI by word searching what ur lookin for. Thats up top of the ini FIND, , next to FILE lol....

then u simply rename it to whatever it is.  example 545565.uzzz is blade.utx

Enjoy! the other redrum youtube video links are in the LINKS section

Lets hope this haunting piece from the Unreal soundtrack will do for a while : )

Rules
by Pizzle over a year ago

Link to maps and server resources is down!
by oZ over a year ago

TEAM SPEAK
by oZ over a year ago
More...

Start a Free Blog at Webs.com